It's been a long time coming. I have thought about it many times, and always considered it to be too difficult to achieve, so I've always decided not to try it out. But now, I really think it to is achievable, and I can do it, so I'm going to give it a shot. I'm going ... more or less ... vegan. 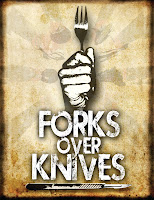 Of course I've always known many great reasons for turning vegan, as we all do. We all know fruits and veggies are good for us, and we all know the benefits of a healthy diet. What many of use don't know  - or even try to ignore -  are the facts and figures which prove this. I recently watched the documentary 'Forks Over Knives' which is all about the benefits of a plant based diet. Of course, there are several documentaries on very similar topics, but what interested me about this particular documentary was the facts and figures, and all the evidence that was put forward supporting a plant based diet. And of course, the healthy and active individuals who are living proof of its success. I encourage everyone to at least watch the documentary to see for themselves.
http://www.forksoverknives.com/
There are some points from the documentary which I want to mention. First is the link the documentary makes between animal products and cholesterol. All animal products, including dairy, contain a high level of cholesterol, which clogs arteries. What if we took out meat and dairy from our diet? Of course, our cholesterol level would more than likely lower. This would probably lead to a reduction in Coronary Artery Disease (and may other diseases) which is the biggest killer in the US.
Would we become deficient in any other important nutrients? Well, vitamin B12. However, generally people don't need a lot, and it can be taken as a supplement, and can be found in other foods such as fortified foods and nutritional yeast (which you may not have heard of....so go read about!) Then there is Iron, which can also be found in vegetables, cereals, legumes, and whole grains. So, no animal products needed. Vitamin D can also be found in fortified soymilk and cereals, and of course, the sun. Protein is a big topic for debate. We all need protein, but it doesn't have to come from animal sources. Legumes, avocado, soy, seitan, tempeh, quinoa and nuts are all possible sources. I personally think we need to get away from the idea that we need animal products in our diet to live a healthy life. It's just not true. We just believe it because it is what we have been brainwashed to believe. But what about calcium? Milk is renowned for its calcium content, but once again, we often fail to realize that calcium can come from other non animal sources, such as green leafy veggies, soy milk, almond milk, tempeh, and more.
http://www.vegansociety.com/lifestyle/nutrition/
One other topic which the documentary mentioned what about protein and acidity in the blood. Basically, too much protein can increase the acidity in a person's blood, and to compensate, the body uses its calcium stores to neutralize it, taking it from bones, which leads to weak bones and osteoporosis. When researching this topic, I found a lot of discussion and debate surrounding this idea, however, I think it is definitely a solid reason to reduce animal protein sources in our diet, especially in older people, who may be more at risk of weak bones.
One other reason to go vegan is the impact that raising animals for food has on the environment.
A vegan diet would decrease pollution, global warming, rainforest destruction and save water. We don't even realize it, but eating meat is destroying our planet.
http://www.chooseveg.com/environment
However, most of us would choose to ignore this fact when faced with the temptations of meat and dairy products on a daily basis.
Of course, the meat and dairy production industry is filled with disturbing facts and statistics about how animals are treated in order to feed us humans. Animals on top of one another fighting for space, cows artificially inseminated and kept pregnant to produce more milk, animals fattened before being slaughtered... We all know about it, many choose to ignore it, and others are ok with it. Some hate it but still cave in to the hamburger. But, animal cruelty doesn't have to be part of our food process. We can opt for a plant based diet, and stop the cruelty.
http://www.peta.org/issues/Animals-Used-For-Food/default.aspx
I've been surviving without meat for years now, that's not an issue. But, how do we survive without the delights of ice-cream? Or yogurt, and milk, and cheese...? Well, that's been my question for a long time. Finally, I have the answer. It was so obvious I didn't (or refused to) notice it. I realized that we really are controlled by what is presented before us. Big companies, advertising, and supermarkets promote what they think we would enjoy, and what they think is 'normal' to consume. Do we have to be brainwashed like this? Fortunately, now the plant based food approach is becoming more and more popular, and people are making educated health based choices, rather than being manipulated by the food industry. We can live without dairy, we just have to explore new options, and find new recipes, based on a plant based diet. We must learn to pull away from our old habits, and open our eyes to options which are natural, healthy, as well as delicious. We must do our own research, educate ourselves, and make informed choices about which foods we decide are best to nourish our own bodies.

So why 'more or less' vegan? Why not fully vegan? Well, of course it is possible, for everyone. And I will try. However, unfortunately we do not live in a vegan world, and I would on occasion put myself in a no-option (or very limited option) situation. Of course, I can deal with it. I'm used to it living in a meat eaters world. And the reason why I would cheat on dairy and never on meat is because of my values. I am a vegetarian. I am a near vegan. Cheating on meat would disgust me, whereas cheating on dairy on occasion would be manageable. Maybe that will change in the future. Who knows.
If going completely vegetarian or vegan seems an impossibility to you, it's always possible to take baby steps. Meatless Mondays, or only eating dairy/meat on weekends is a great place to start. Experimentation is key. Try new dishes without meat or dairy and see how they go. It's not impossible, and it's not a lot of work. It's just about habit. It's about educating yourself and making informed choices. Whatever you decide, do it out of compassion and love for your own healthy body.